Every Java Developer is using OpenJDK. This makes OpenJDK the most impactful project for Java Developers. OpenJDK is the open-source Java SE implementation. Oracle is the biggest contributor. But many other companies are part of the project, like Red Hat, SAP, Google, BellSoft and many more.

How to start contribution in OpenJDK

Sign Oracle Contributor Agreement to start contribution. Scan it and e-mail the result to oracle-ca_us(at)oracle.com

Although the page says it takes 2 weeks, for me it was fast. I did some mistakes in the form and Oracle’s team helped me to submit it again. It might take a couple of days. Meanwhile, you can prepare your development env ready for contribution.

JDK GutHub repo provides steps to set up your development env. This is the link from JDK source repository. From this link Instructions for the Impatient are:

In case you get stuck anywhere in the above steps, you can find a solution on the same page. And it is ok to get stuck when you set up this first time, as it needs some libraries etc.

2 Problems I faced are:

For problem 1, I got a message on the console saying install a set of libraries. It worked after installing those.

Initially, I tried below, it failed due to case mismatch, it should have been libx11-dev not libX11-dev:

For problem 2, found below on the same page:

“Most of the JDK tests are using the JTReg test framework. Make sure that your configuration knows where to find your installation of JTReg. If this is not picked up automatically, use the –with-jtreg=

I have jtreg source code as well so in my case this option was something like this: –with-jtreg=/home/vipin/IdeaProjects/jtreg/build/images/jtreg

Once your setup is successful and you execute tests, the result will be something like this:

At the end of the test you will see below output:

Setting up the project in IDE

After this, you may want to setup JDK project in IDE. I use IntelliJ, and we have a shell script idea.sh comes along with jdk to setup a project for you. I wanted to setup module java.base, executed following command from my base directory.

In case you want to set up all modules then run idea.sh.

The following command will run all the tests in the test/jdk/java/lang/Appendable/ and its sub-folders.

Following is JTREG GUI on my system 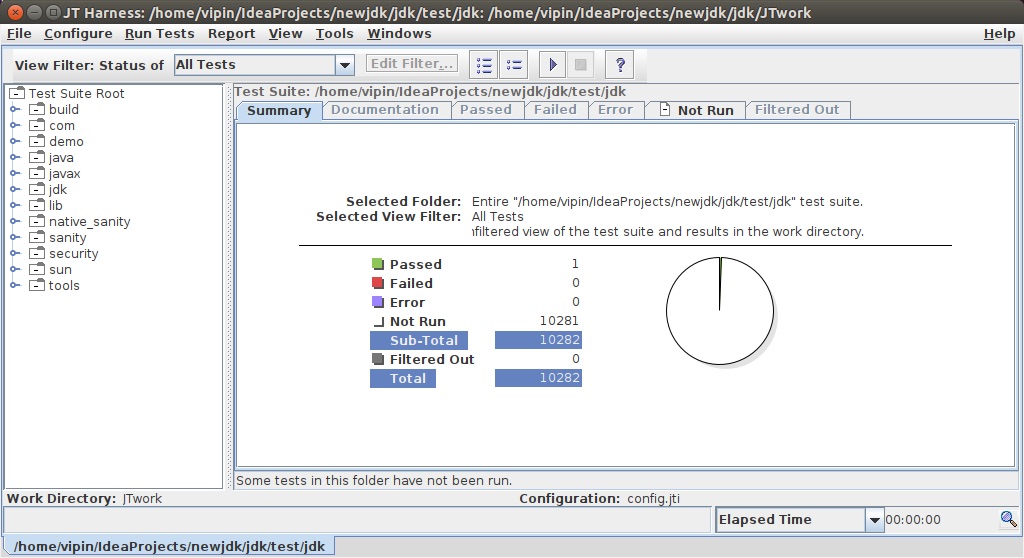 After fixing some issue you need to prepare patch using webrev.ksh

First step is to copy webrev.sh in jdk source directory and then execute following command, it generates webrev dir and webrev.zip file in the same directory.

After creating a patch you need the bug id to submit it against that bug. Send an email to the corresponding email list. Initially, someone should sponsor your fix and create a bug id for you.

You can not attach anything and send it to the email list. If this is a small patch then you can add patch text in an email or talk to sponsor how do they want to accept it.